Making feed swaps in favour of British grown protein has the potential to cut the carbon footprint associated with bought-in feeds by 28% at Thornington Farm in Cornhill on Tweed.

Calculations carried out by Mole Valley Farmers show that removing soya and palm from the compound and blend and replacing them with British grown protected rape could cut the predicted carbon footprint of bought-in feeds from 0.32 to 0.23kgCO2 e/litre (see table).

Dairy farmer Tom Neill was surprised by the impact these changes could make whilst still rationing for the same production level. “I’m surprised it’s reduced so much. It’s the first time I’ve been able to look at a figure for bought-in feed. If you can put a figure on it and compare, it’s very useful,” he said. “I have been looking at removing soya and palm, but this will give me a push to take it further.”

These figures have been a useful guide for Mr Neill, with the support of the company’s Nutritionist, Darren Wilkinson. As an Arla 360 farmer, Mr Neill is already working hard to lower the environmental impact of his 320 cow British Friesian dairy herd. This fits with Arla’s targets for its producers to reduce their emissions by 30% between 2015 to 2030 and achieve net zero by 2050.

Steps that have already been taken include:

Climate Check reports carried out by Arla have also highlighted feed supply as an area for attention, with Mole Valley Farmers’ experience suggesting it represents around 30% of a farm’s total carbon footprint. Consequently, it’s something Mr Neill is keen to address. “Plus Arla always says, the lower the carbon footprint, the higher your profits will be,” he added. 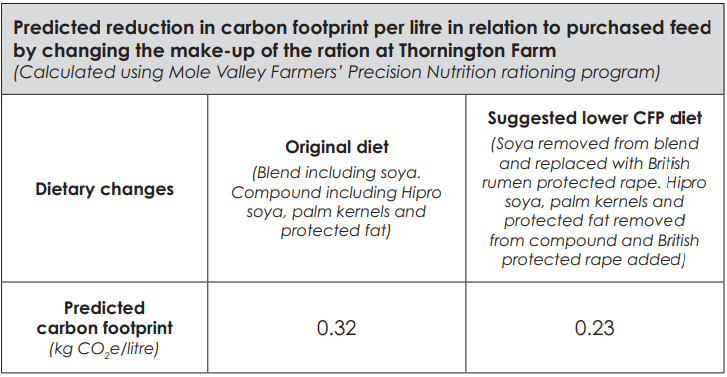 *Both diets rationed for 40 litres and include the same level of first cut grass silage, wholecrop barley, molasses, limestone flour, minerals and urea treated homegrown barley. Only the type of ingredients and inclusion rate of ingredients in the blend and compound were changed. Calculations include estimates of carbon footprint for some ingredients. Figures should be used as a guide only.