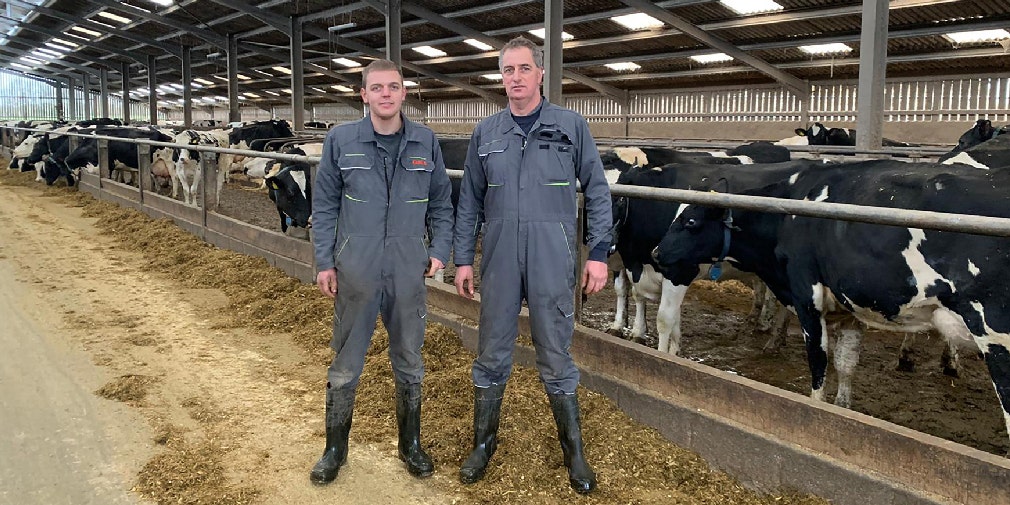 Less health issues and reduced antibiotic use are just some of the reasons Darren Coombes is committed to supplying freshly calved cows with Molecare Recover rehydration drink at calving.

“I tried a sample of Molecare Recover and since then, I’ve never looked back,” he says. “I’ve gone from 2% displaced abomasums to having none in the last 25 months.”

It was Jade Chidgey, Business Development Manager for the Bridgwater store, who originally suggested supplying freshly calved cows with a Molecare Recover rehydration drink. By getting fluids into the cow, the aim is to limit the impact of negative energy balance at calving and encourage dry matter intakes. It’s these intakes which could help reduce the risk of a displaced abomasum (DA).

A good start with Molecare Recover

Darren believes getting cows off to a good start and transitioning them onto a quality diet is essential in order to hit average yields of 10,800 litres a cow a year. “It’s like getting up for work in the morning; if you get up late, things don’t go right for the rest of the day. It’s the same for the cow; if she doesn’t start right, she’s not right for the rest of the lactation,” he says. Now, any cow that has had twins or a 400+ day previous lactation receives a Molecare Recover sachet dissolved in 30 litres of water. Darren is adamant that this is put in front of cows “within two minutes of calving.” He adds: “Once they take a taste they drink it in one go; they won’t stop.”

Before, cows would have had to be self motivated to walk to the trough to drink, which often meant a delay of 2-6 hours. With about one in 20 calvings resulting in twins, and these animals more prone to retained foetal membranes (RFMs), Darren believes the extra fluid also helps cows get rid of their afterbirth. As a result, he’s seen an estimated 70% reduction in RFMs.

Targeting Molecare Recover towards freshly calved cows with high temperatures has also helped reduce antibiotic use by about a third around this time.
All freshly calved cows are managed in a separate group on a loose straw yard for three days post-calving. Darren uses this time to monitor individuals and carry out temperature checks. He sees this as “good stockmanship,” which allows him to spot problems early and prevent them from escalating.
With this in mind, he now tubes any cow with a high temperature 48 hours
post-calving with Molecare Recover. He’ll also provide them with a non steroidal anti-inflammatory, rather than antibiotics. This means cows are more likely to get better on their own, without antibiotics.

Darren also believes that the inclusion of Maxammon treated grain in the milking cow diet has benefited gut health by reducing acid load in the rumen.
Maxammon is an advanced urea and enzyme based grain treatment. Treated grain has a rumen friendly, alkaline pH of 8.5-9, which reduces the likelihood of acidosis. Treatment also typically increases the protein level of wheat and barley by 4%.

For more information, please contact the Feed and Nutritionists Line 01278 444829.