Hitting a target age at first calving of 24 months has the potential to save you money and lower the environmental impact of heifer rearing by around 20%, whilst also delivering milk yield benefits.

It also reduces the feeding period from three months to calving by 180 days. (See table) The work was carried out as part of Mole Valley Farmers’ Climate Positive Agriculture initiative to help farmers understand and reduce their environmental impact. 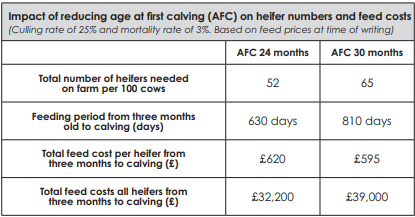 Dr Witt said: “Total feed cost per heifer from three months old to calving is slightly lower on the 30 month system. However, because more heifers are required to maintain the herd’s replacement rate of 25% and they’re unproductive for longer, the overall total feed cost is almost 20% higher.”

There were also implications on the farm’s carbon footprint (CFP), not just because of higher feed intakes on the 30 months system, but also because of greater predicted enteric methane production. Fertiliser application requirements were also higher due to larger grazing area requirements, whilst manure output and energy use also increased.

Dr Witt added: “Calculations carried out using the Cool Farm Tool show that if you reduce age at first calving from 30 to 24 months in a herd averaging 10,000 litres per cow per year, there’s the potential to lower emissions associated with the heifer unit from 0.23kg CO2 e per litre of fat and protein corrected milk to 0.18kg CO2e per litre. That’s about 20%. The actual amount will vary from farm to farm.”

He also said there were likely to be milk yield benefits from calving heifers at a younger age, adding: “By calving at 24 months, these heifers have an extra 176 days in milk* in their lifetime compared to those calving at 30 months. If heifers yield 30 litres a day at 36ppl, that generates about an extra £2,000 in milk value per heifer.”

For information on how Mole Valley Farmers can help you to understand and lower your farm’s carbon
footprint, call the Feed & Nutritionists team on 01278 444829 or email [email protected]