Dairy farmer Tom Smith from Ayrshire and mixed farmer Matthew Jordon from Morpeth both see the benefits of feeding Maxammon treated grain to their cattle.

Mr Jordan has used Maxammon for five years in his suckler herd of 90 pedigree Limousins. The farm feeds as much homegrown cereals and silage as possible, which has cut their bought-in protein by as much as 87%.

He said the health of his cattle had significantly improved since feeding Maxammon-treated cereals. The product raises the pH and protein of the grain, allowing more cereals to be fed safely.

Previously calves had suffered from cases of acidosis and laminitis, but since moving on to the Maxammon-treated barley, health issues have been eradicated.

Barley is treated in five-tonne batches and then kept covered in a trailer until it’s ready to feed, at which point it is stored in a feed bin. Treating it in this way suits Mr Jordan’s system and allows for flexible rations to be created for the different groups according to their requirements.

He said: “For us, it’s not just about the performance, it’s looking to be more efficient, and we’re aware of playing our part as the industry works towards net zero.

“The cattle make the most of our grazing here, and we use as much of our homegrown cereals and silage as possible. This has meant an incredible reduction of bought-in protein by as much as 87%. With the rising cost of raw materials, this has a positive impact on our business as well as the environment.”

Mr Smith also feeds Maxammon-treated homegrown barley in his herd of 240 dairy cows. The housed herd have had the same simple feeding system for several years, composed of high-quality forage fed in a TMR alongside the barley and minerals.

Maxammon enables the farm to maximise its homegrown cereals, making the end product more sustainable and improving cow health through improved rumen efficiency. With the diets making the most of homegrown cereals and forage, it is also cost-effective, which helps minimise feed cost per litre and maximise margin.

HOW MAXAMMON CAN HELP YOUR HERD 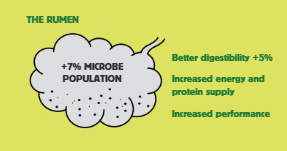